I was fully prepared to be let down by the Galapagos. I just didn’t see how it could live up to its name, but I was blown away.

We arrived in San Cristobal all guns blazing to make sure we didn’t miss the 3 o clock boat inspection.  After weeks of chucking stuff out and getting the boat ready for this, it was all over in a matter of minutes. In fact the officials were more bothered about their free cans of coke than what we had on board.

You can’t roam free in the galapagos so Tiggy and James hired a guide. The intinary was very strict about times and places so after a 4 am start in the poaring rain we were all pleased to arrive at Isle Espanola.  This was my first experience of an proper Galapagos island and probably still my favourite . We saw iguanas, lizards, crabs, sea lions and all kinds of birds. There was so much wildlife you had to watch where you stepped.

We watched a sea iguana swim dangerously close to a blow hole but fortunately (sadly) he was spared. Aparently it isn’t uncommon for them to go for an unexpected joy ride!   The coastline was beuatiful but my favourite thing was getting to see an albatross.  Fabri our guide had been a few days before and they hadn’t arrived yet so we were really lucky.   Birds of the ocean, they fly thousands of miles to meet up with their partners here and then take it in turns to fly 300 miles plus to find food for their young. I think I’ll forever be haunted by the Skelton of the one that didn’t manage…

The rest of the week we visited up to two islands a day and saw frigate birds courting, blue footed boobies nesting , all kinds of iguanas and little lizards trying to assert their dominance at us by doing mini press ups. I’m sure this scares off other lizards but it looks pretty funny!

Every island we landed on , we had a walk and a snorkel. After swimming into currents,  over sharks and being swam at by a seal I decided I much prefered the walks. Not that land was much safer as I managed to be jumped at by a pariculary large crab,  ran at by an iguana and chased by several sea lions. Clearly the next David Attenbourgh in the making. ..

On the last day we climbed to the top of barthelome in what can only be described as lunar landscape. The view from the top was breathtaking though. Unfortunately so were the 300 plus stairs!  We saw the mini penguins and they were super cute but super uninterested in us. In fact I was surprised by how most of the wild life here was so unbotheted by our presence. .. it was almost like we weren’t there.

To have seen and explored all these amazing islands is something I will never forget. 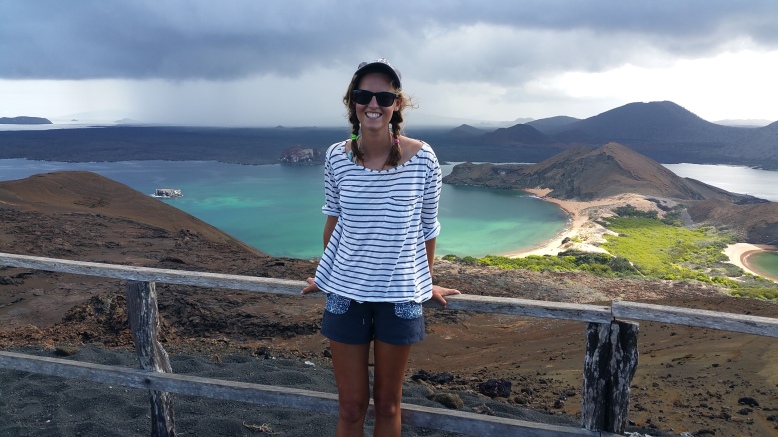 One thought on “Galapagos.”